See other gifts available on Zazzle.

Seeing is believing, IT'S WEIRD! FANTASTIC!
Stop on Line-Release Brakes-Watch for Cars when you Roll Back
﻿             ﻿Prather's Laundry & Dry Cleaners   Watch for Prather's White Trucks

A few blocks from the heart of Lake Wales is that mystifying and fascinating phenomenon  S P O O K   H I L L.  Here playful ghosts apparently seize your car and in defiance of the laws of gravity and your previous experience in such matters, roll your vehicle gently backward uphill, while they chortle in unholy glee at your mystification.

BEWARE THE GHOSTS AND GOBLINS
AND
HAVE A  S P O O K TACULAR DAY!! 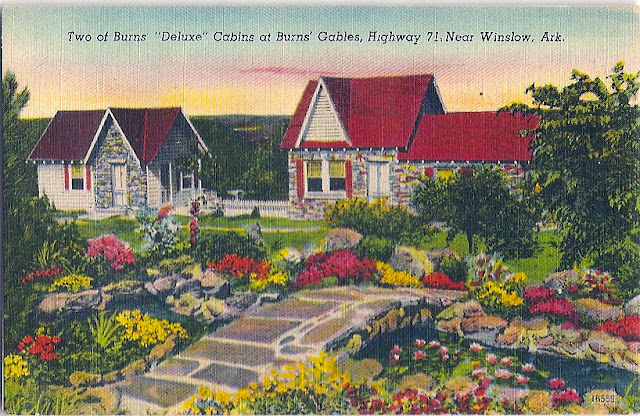 What a beautiful card, surely a fairytale setting.
Do you think places like this still exhist?
I would love to visit awhile.

SLOWLY I TURNED, step by step, inch by inch

Look what I found. Don't you just love the internet?
SLOWLY  I  TURNED, step by step, inch by inch.
Complete and uncut feature at the end of the Post 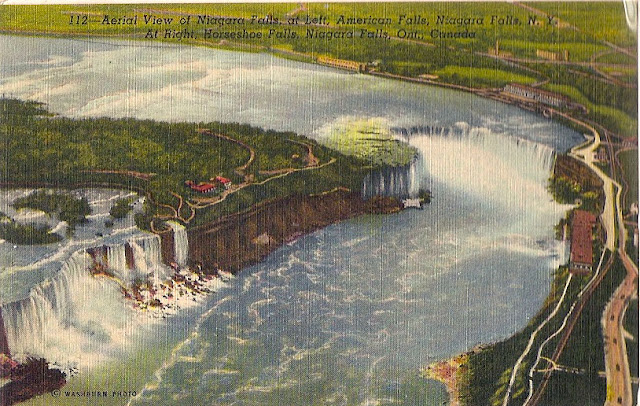 "SLOWLY I TURNED, step by step, inch by inch"
Be careful, Don't Get Hurt, steer clear of Stooge pokes and punches.
Yuk! yuk! yuk!
Put on your Tap Shoes you might want to
shuffle off to Buffalo before its over.

SLOWLY I TURNED, step by step, inch by inch

Isn't that a Three Stooges gag?
It has something to do with NIAGARA FALLS.

I always picked up any Niagara Falls Post Cards I came by.   There are lots of those cards out there trust me.  After all it is one of the top Tourist Destinations.  Unfortunately I have not been to Niagara Falls.  Hope I can see it one day.  It must be a grand experience.

Above the American Falls a series of shelves create numerous miniature Niagaras, and stubborn rocks resisting the current as they project themselves up toward the surface, cause a tumultuous rapids of white spray and foam.
The skyline of the World's Power City is yearly becoming more impressive, and in the background of this picture we see the Cataract House, the United Building, and the Niagara Hotel. 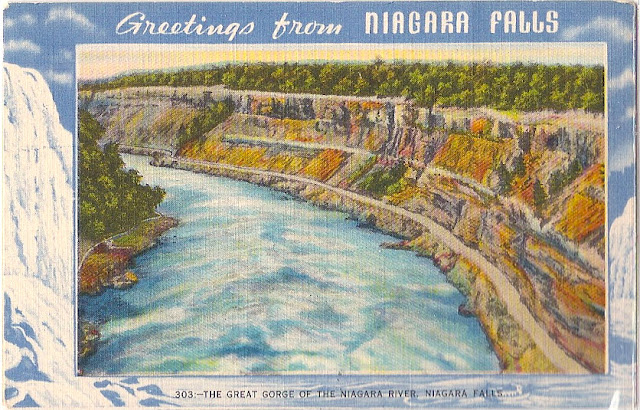 American rapids above the Falls looking from Goat Island, N.Y.
﻿﻿
American Falls from Goat Isle.  From this point the 1,060 feet of the contour line of the American Falls can be seen to the best advantage.  Goat Island itself is a beautiful Natural Park heavily timbered, surrounded on three sides by rushing torrents and with a precipice 200 feet high extending across the lower end.  This view of the falls must be seen to be properly appreciated.

I think this subject will make a great series with episodes.
So lets get going.   First I think we need to find a VACANCY for our headquarters.  We have a couple of choices. 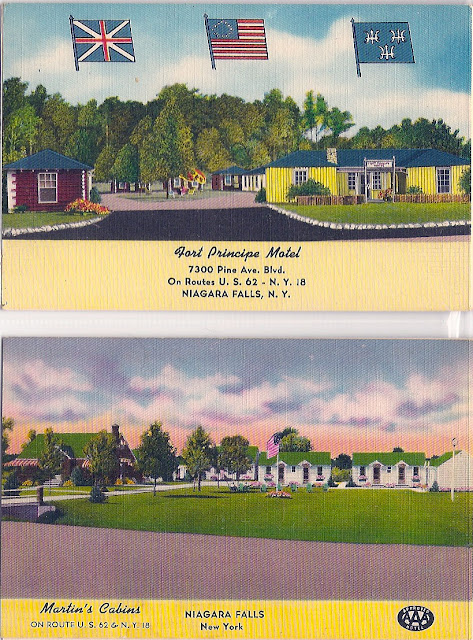 They look like nice places and are both on Route U.S. 62 & N.Y. 18
Niagara Falls N.Y.  I think Martin's Cabins is our best bet they are only 8 minutes from the Falls but Fort Principe Motel is 15 minutes away.
Martin's Attractive Court on Spacioous Grounds--Hot Water
Heat--Private Shower Baths--Open from March to December.
at 12:56 PM No comments: 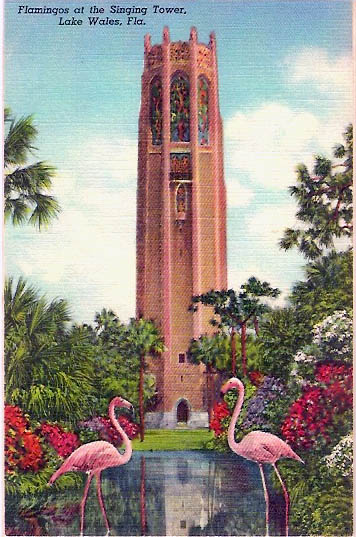 It is a beautiful Art Deco Structure in an obscure setting named Mountain Lake Sanctuary at Lake Wales Florida.
A truly old Florida Tourist Attraction.
And I might say well worth the trip.
Links below.
Hear the Bells
See the Gardens and Tower
at 5:04 PM No comments:

Benevolent and Protective Order of Elks

Rosslyn
HOTELS
DOWNTOWN LOS ANGELES
I wonder exactly what an Auto Drive-In Lobby is or looks like, any ideas?
The marble Subway and Garden sun roof sound pretty nice.
I just noticed one of the Hotel signs reads ROSSLYN ANNEX.  That doesn't sound very classy does it?

Reposted from SkyscraperPage.com
The Hotel Rosslyn has a history unique in all of the city of Los Angeles.

Once the tallest building in LA, the Rosslyn boasted in it's large rooftop sign as being the "Fireproof Million Dollar Hotel."

It's best years are behind it now, seeing some minor glory in 1987 as the rooftop site of U2's music video for "Where the Streets Have no Name."

Today the Rosslyn is a flop house, with rooms going for $8 a night. The seedy side of downtown Los Angeles lives here now (2003). 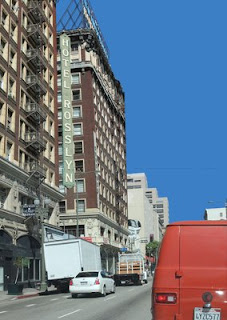 Notice the original vertical sign is still in place.

FORD  THEATRE--LONCOLN MUSEUM, WASHINGTON, D. C.
Lincoln’s assassination took place on April 14, 1865.
Be sure to go to the Fords Theatre website and take some time to learn about the theatre today and yesterday.  Find the video at the About Ford's Tab and click on Full Screen. Its worth a look.
at 12:35 AM No comments:

I came through Buellton, and near by Solvang some years ago on a road trip.   Cute little Danish style town.  It was before I knew of Andersen's unfortunately.   I do love Split Pea Soup; who doesn't?

You'll be Admired
in a
Bunny Soft 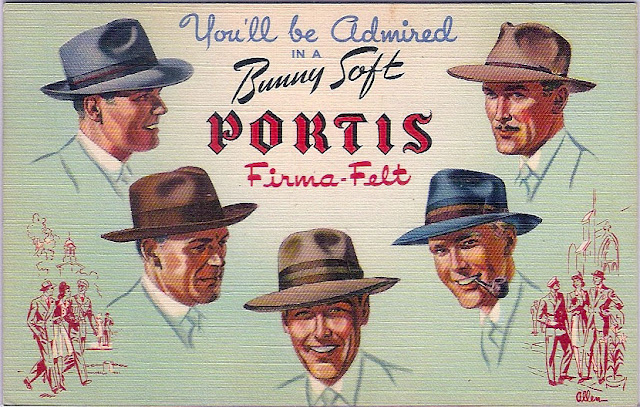 Reposted from:http://thefedorachronicles.com/forum/viewtopic.php?f=113&t=7189
Portis
The Portis Brothers Company was founded by the Portis brothers in 1914, and was based in Chicago its first decade, but later moved manufacturing across the lake to western Michigan.

The company made fine hats, and did a lot of advertising in magazines such as Esquire and Colliers.

HERE I AM, WAITING FOR YOU IN MIAMI BEACH FLORIDA
at 11:12 AM No comments: 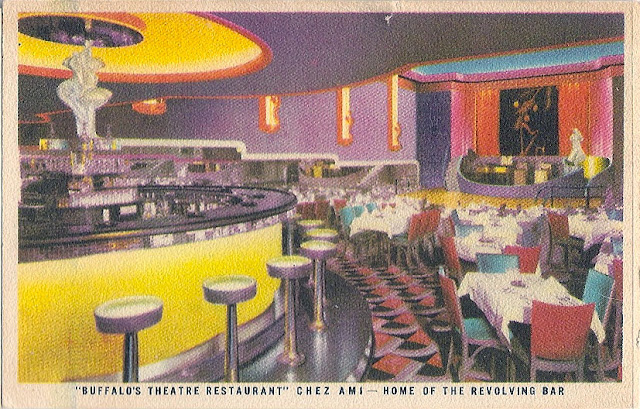 The Interior of the Chez Ami was destroyed by fire on Christmas night of 1941 and reopened in the spring of 1942 as successful as ever.
Enjoy the Colorful History of the Chez Ami at the link below.
http://www.forgottenbuffalo.com/forgottenbflofeatures/chezami311delawareave.html
at 12:02 AM No comments: 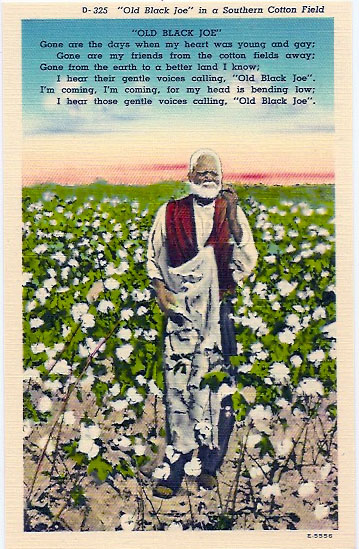 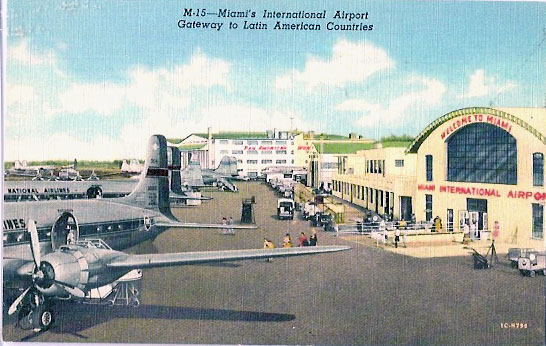 I have flown in and out of there many times over the years.  Things sure have changed since this Post Card was current. 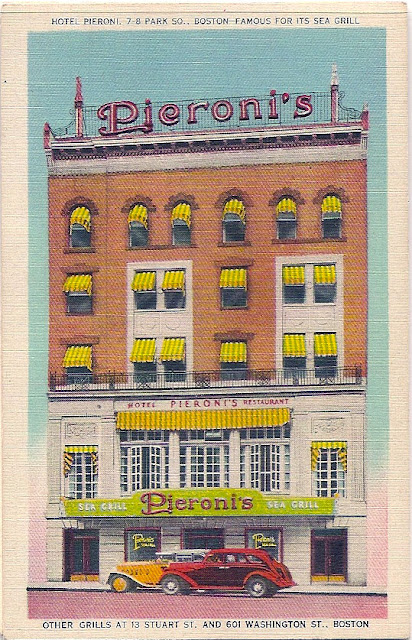 Other Grills at 13 Stuart st. and 601 Washington St. Boston
When in Boston, stop at HOTEL PIERONI and dine in one of PIERONI'S famous SEA GRILLS.  Established 1895
at 10:07 PM No comments: 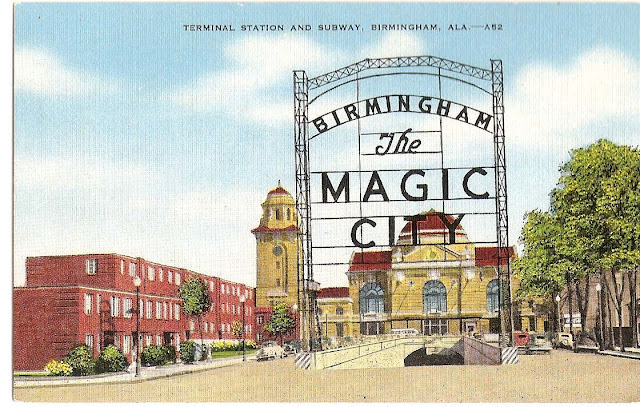 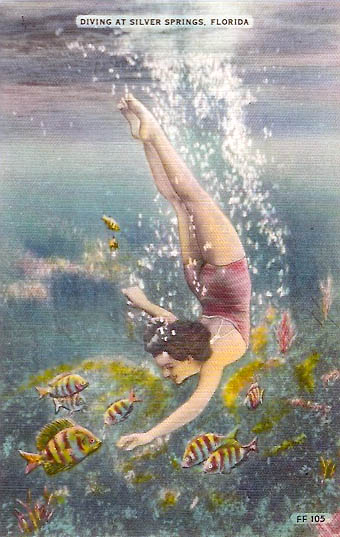 SILVER SPRINGS NEAR OCALA, FLORIDA
An underwater scene in the crystal depths of world famous Silver Springs.   Here the water is so clear that one can see easily to the bottom bowl and underwater pictures can be made successfully.   More than 43 varieties of fish, turtles and shell fish may be seen through glass-bottom boats in this underwater fairyland of nature.

"TOMORROW'S HOTEL TODAY"
We can check MACKAY'S HOTEL COURT for a VACANCY.  It will be a great place to stay near Silver Springs.  It is recommended by Duncan Hines AAA & Quality Courts. 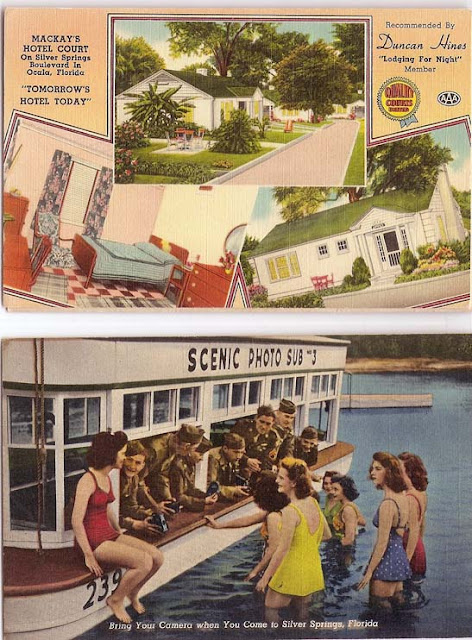 Bring Your Camera when You Come to Silver Springs, Florida
You may even have a chance to entertain the Troops. 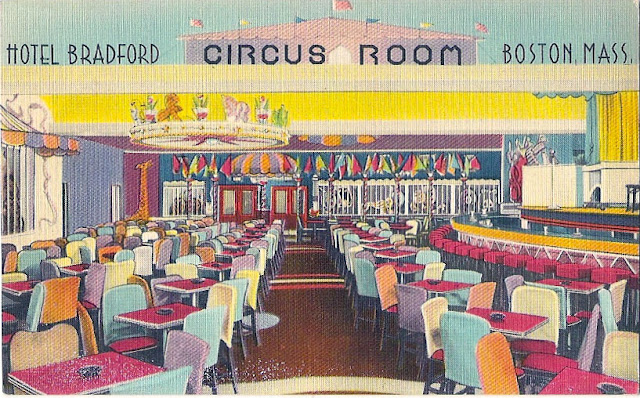 "The Traveler's Home of Distination"
Montgomery, Ala. -- Mobile, Ala. 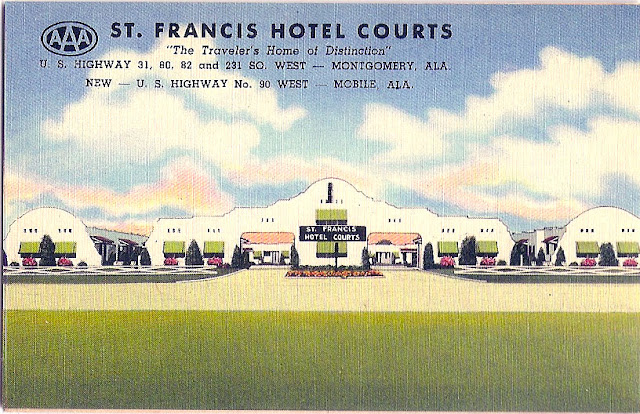 Arlington is a beautiful Antebellum Mansion in my hometown of Birmingham, Alabama.
I remember as a child riding by on our way downtown but never stopping.
I went with my father on one of my visits home back in the late 80s. 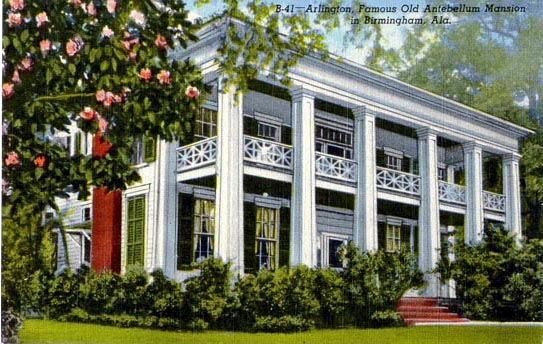 Arlington is a fine example of Greek Revival architecture dating from the 1840s. Originally called "The Grove" the house was built by Judge William S. Mudd, one of the ten founders of Birmingham, and is the only remaining antebellum mansion remaining in Birmingham. Shortly before the end of the Civil War, General James Wilson arrived with over 13,000 troops and using Arlington as his headquarters, planned the destruction of the Confederate iron furnaces and the military school at the University of Alabama in Tuscaloosa.
The property went through several owners and in 1902 became the home of Robert S. Munger. Over the next twenty years he did many renovations including plumbing and electric lights. He had another structure moved across the street behind the main house which was used for a kitchen, dining room, sun parlor and sleeping quarters.   Mr. Munger also had one of the first "motor cars" in Birmingham.

Located on six acres in the heart of Old Elyton, the first permanent County Seat of Jefferson County, Arlington is a center for historical, cultural, and civic activities.
More information found at:
http://visitsouth.com/articles/article/arlington-antebellum-home-and-gardens-birmingham-al/
at 1:06 AM No comments: 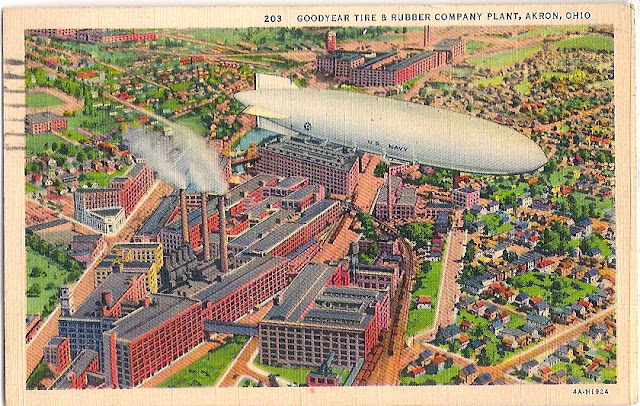 We have a Goodyear Blimp base near me in Pompano Beach Florida.  Pompano is where our "TROPICAL Post Card Club" meets.
﻿﻿﻿
﻿﻿
at 10:41 AM No comments:

I had the opportunity to eat lunch one afternoon at the PLAINS HOTEL in what I think must have been "WYOMING ROOM".  Looks different but still a great experience.  Even had a chance to chat with the Chef.  The food was delicious by the way. 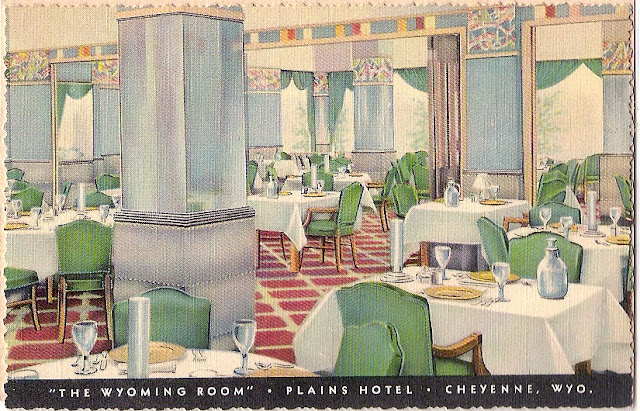 The Plains Hotel has a history not to be ignored.  Check out the story of Rosie who haunts the Plains Hotel along with her husband and the other woman.
http://www.hauntedhouses.com/states/wy/plains-hotel.htm
at 12:17 PM No comments:

ONE OF THE CITY'S OLD LANDMARKS
WINSTON-SALEM, N.C. 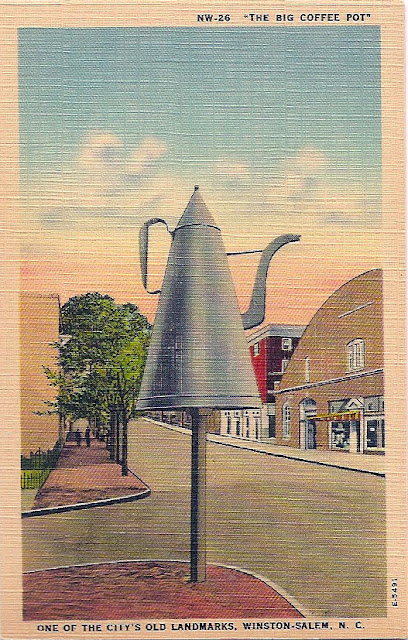 ﻿﻿
﻿The Moravian tinsmiths, Samuel and Julius Mickey, built the famous coffee pot in 1858 as an advertisement for their business. Originally located at the intersection of South Main and Belews Streets in Salem, the coffee pot was moved to its current site at South Main Street and Old Salem Bypass when Business 40 was constructed in the 1950s. Many legends have developed about the distinctive seven-foot pot. One such tale holds that a Yankee soldier hid in the pot to avoid Confederate soldiers during the War Between the States.
﻿
﻿
at 9:50 PM No comments:

A FLORIDA BLOSSOM AMONG GRAPEFRUIT AND ORANGES
It's Blossom Time in Florida.  Here is one of the photographic models of the Florida Cypress Gardens proving that the climate makes the blossoms bigger and better.  The associated citrus fruit represents one of Florida's largest industries.  Posed by Nance Stilley

﻿ Historic hotel dating to the St. Louis Worlds Fair, located on the west-side of the downtown area.  This building was built for the 1904 St. Louis Worlds Fair, originally with 400 rooms. Following the Fair, the hotel, in the heart of the downtown entertainment district, was a favorite of the social set as limousines deposited theatre-goers there for after-performance dinners and gatherings.   In 1928, a major addition to the west was completed when owners rebranded the hotel as the New Hotel Jefferson. The addition notably did not attempt to replicate the appearance of the original section, but instead offered a more subdued but still classically-oriented facade on Locust Street. Information reposted partially from:
http://preservationresearch.com/2012/09/hotel-jefferson-brochure/ 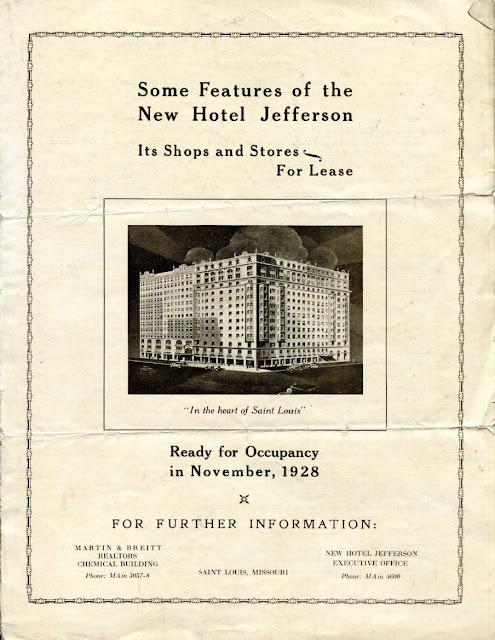 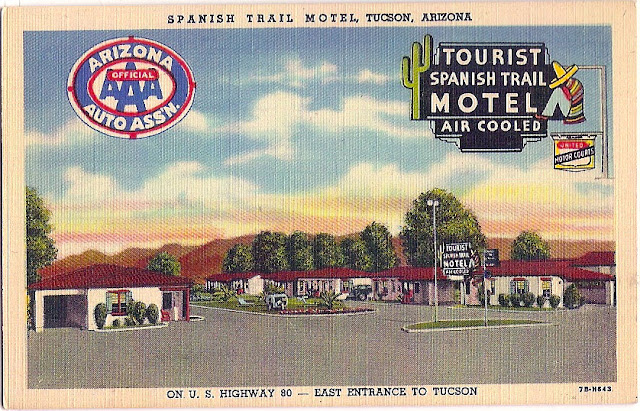 
Dad wrote in his diary for June 11, 1939:
“In Tucson, we stopped at the Spanish Trail Motel – a marvelous place – new, clean, excellently furnished, fine bathroom, a little kitchen with electric stove and electric refrigerator,
”And marvel of marvels, the whole little Spanish cottage was air-conditioned with an individual little cooler that is known hereabouts as a desert cooler. Heaven won’t be any more welcome than this little motel cottage was.” 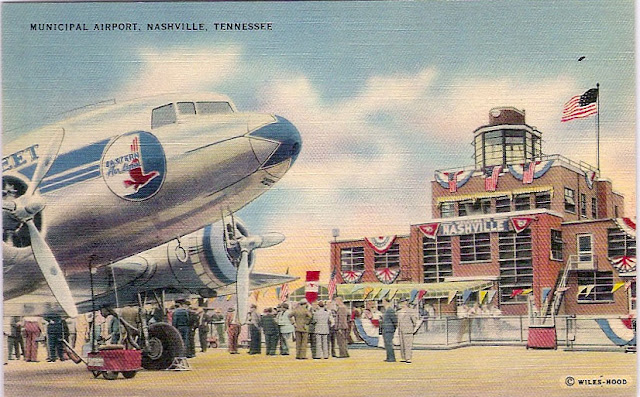 Nashville Airport one of the largest and busiest in America 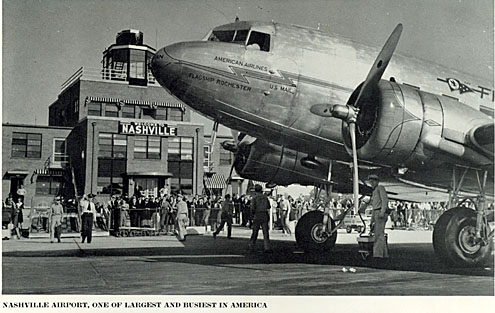 See Historic Nashville for other facts and interests.
http://historicnashville.wordpress.com/2009/08/20/nashville-airport/ 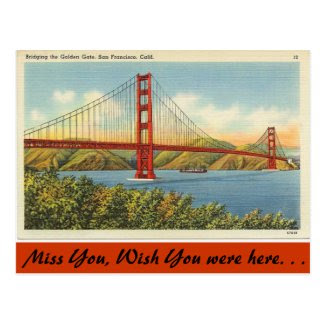 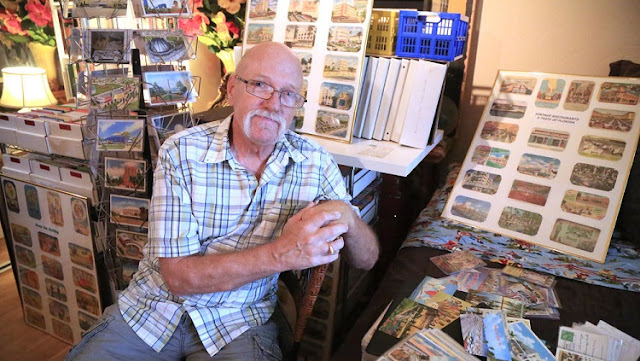 luvlinens
United States
I live in Ft. Lauderdale Florida and collect Linen Post Cards. I would luv to share My images with you.

Another day in Paradise 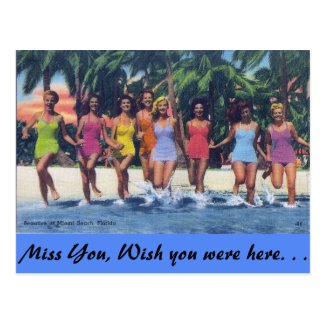 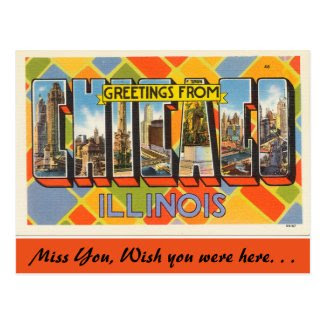 Illinois, Greetings from Chicago
by LUVLINENS 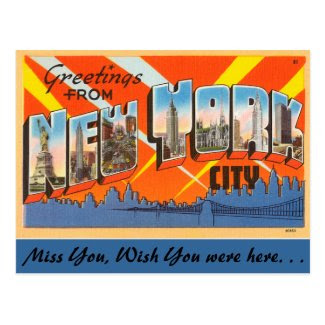